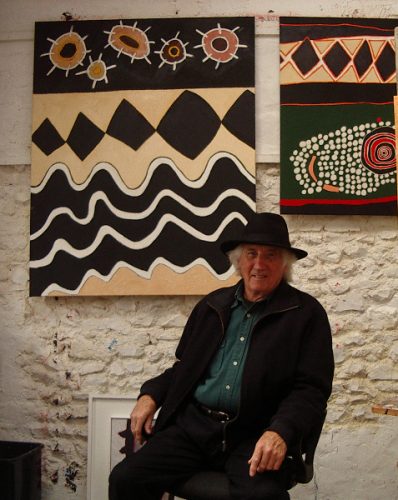 1957 Stationed at Aldershot. Travelled around England cycle racing for the Army and RASC.

1960 Shared a flat in Earls Court, London with Derek Boshier and John Selway. Exhibited early abstract paintings in Yeovil Artists Exhibition. Cycling in France and Spain. Met Derek Boshier and Peter Jones and crossed to Morocco, hitching southwards to the Sahara before returning to Gibraltar. Began a major series of paintings at parents’ home in Montacute, Somerset.

1961 Painting in Montacute and making lithographs at YSA. Following a review of Second Yeovil Artists’ Exhibition was offered a solo exhibition of paintings at the Fimbarrus Gallery, Bath.

1968 Solo exhibition of paintings at LGA, Detroit. Also in travelling exhibition, British Painters, Detroit and elsewhere in the USA.

1971 Bought a cottage in Lyme Regis. Began working on the book The English Sunrise with Tony Evans.

1972 Publication of The English Sunrise.

1973 Disillusioned by colour system paintings, Rice began making series of photographic collages as a way of reassessing his career.

1974 Became Chairman of the Printmakers Council. Visiting Lecturer at the Royal College of Art.

1975 Exhibition of Colour System paintings at Brighton Polytechnic, after which Rice stopped painting.

1976 Exhibited in The Process of Printmaking, a British Council Exhibition touring India.

1981 Started painting again in his new studio after a gap of seven years. Work based on the archaeology of the surrounding landscape.

1984 Living alone at Nallers Farm, which was put up for sale after split with partner. On the return journey from a cycle tour of Exmoor, Rice saw a derelict property for sale near Hewood. Bought Newhouse, Hewood, and moved in on Boxing Day.

1986 Made first paintings at Newhouse, based on Medieval Art.

1991 Made paintings using motifs from prehistoric archaeology and his own pottery finds.

1995 Completed dummy of a new book, A Pictorial History of Santa Claus, published by Chatto and Windus. First solo exhibition of paintings and prints since 1975 at The Meeting House, Ilminster, Somerset.

2005 Exhibited at the Somerville Gallery, Plymouth with Terry and Anthony Frost.

2015 Exhibition ‘Palindrome: The Sixties Art of Brian Rice and Richard Rome’ at University of Kent organised by the Redfern Gallery with Kent University. Working on new paintings. Work continued on Catalogue Raisonne of Paintings.

Profile of Brian Rice by Sara Hudston — This essay was written to accompany a profile of BR in ‘Printmaking Today’ Vol. 10 No. 2, Summer 2001.