Opens January 24th 2020 The museum in Exeter has several examples of Rice’s work in their permanent collection, and along with these this show will consist of a large selection of paintings and prints spanning Rice’s long career. The earliest work to be shown is from 1954, (made at Yeovil School of Art)  followed by … Read more 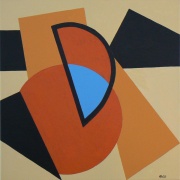 Brian Rice: Recent Paintings October 14th – November 4th 2019 ‘In February 2014 I had an exhibition of my early early work (1959 – 1970 ) at the Redfern Gallery, London. I have found in the past that reviewing my work in a major exhibition has brought about a change in direction. In this case, … Read more

Work exhibited nationally and internationally since 1961